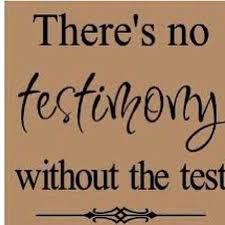 The tie in between today’s readings: There’s Always a Test

We start out our reading in Genesis with God creating Adam and Eve and placing them in the Garden of Eden. He made them in His image and gave them free will in order to have a relationship with them.  In order to establish that relationship, God planted the tree of the knowledge of good and evil in the middle of the Garden. He gave them orders not to eat any of its fruit; it seems that with free will, there is always a test. Satan, whose pride led him to fail in his relationship test with God, sought to take mankind and the earth as a prize. Achieving that would not only expand his dominion but slap the Almighty in the face at the same time. He watched, waited, and formed his plan.

It was another day in Paradise. Adam and Eve stopped for a moment to wonder at the tree of knowledge. In an apparently normal context, Satan started his temptation with the woman. His attacks were three-fold: appeal to the body, appeal to fascination, and lie that your life will be better by disobeying God. In the end, he had Eve rationalizing that the tree was good for food, had eye-catching fruit, and could make you wise. She ate it and gave some to her husband. After this first sin, everything changed. They became mortal in themselves, they became estranged to each other, and they died to God. To mitigate their guilt, they started the fashion industry by covering their nakedness with their fall fig leaf line. “Oh no,” said the Lord, “That won’t do.” He killed the first animals and made garments for them out of their skins. The sacrificial system had begun. They were driven out of the Garden to begin a life of blood, sweat, and tears, but not without hope. God said that He would make a way back. He promised.

Sin passed through every generation of man leaving pain and destruction in its wake. Even the best among us, like King David, a man after God’s own heart, did not escape. He committed adultery with Bathsheba, had her husband killed, and quickly married her to cover up the pregnancy. It was not until Nathan, the prophet, called David out on his actions that he confessed. Our reading in Psalm 51 looks like a scene in a police interrogation room, as David the King pleads for mercy from God the District Attorney.

Verse 5…I have a back story

“OK,” says God, “I believe you, but justice must be served. I have an amnesty program that will go into effect as soon as I can fund it. Would you like to be in it?”

“Your majesty,” the Lord answered, “Even a king like yourself couldn’t even begin to pay the price that I’ll need for this project…but there is someone that I have in mind.”

Jesus the Godman is in the wilderness on the fortieth day of His fast, in our reading in Matthew 4:1-11.

“It’s time,” the Devil thought, “I’ll use the same tactics that have served me so well from the Garden until now. He may be God, but I’ll bring Him down through the man. There is always a test. They always fail.”

Appeal to the body.

“Since you are the Son of God, Jesus, turn these stones into bread.” He began.

“Man shall not live by bread alone, but on every word that proceeds from the mouth of God.”

“Come with me to the top of the temple.” The Devil continued, “I know from the word of God that His angels will protect you so that you wouldn’t even trip over a stone. Imagine the following you’ll gain if you step off this ledge and everyone below sees you gently float down to the ground. You will be spectacular…amazing…a superstar! The nation will kneel before you as their Messiah and follow you to the ends of the earth! It’s so simple! Just jump and the world will be yours!”

Jesus said to him, “On the other hand, it is written, ‘You shall not put the Lord your God to the test.’”

Appeal to bettering your life by disobeying God.

“Let’s go mountain climbing. Look, Jesus from here you can see the whole world and it’s mine! God doesn’t love you. Look how He’s making you suffer. Forget Him. Join me. You can be my #2. I’ll give you everything! Gain without pain!”

“Be gone!” answered Jesus, “You shall worship the Lord your God and serve Him only!”

Satan left Him for a season, but during the life of our Lord he came back again and again to tempt Him in every way possible. Jesus always prevailed. This qualified Him to become the perfect sacrifice to rescue mankind from the grip of sin and death. Through His cross and resurrection, Jesus became a second Adam.

This brings us to our last reading in Romans 5:12-19. Simply put, the first Adam sinned and brought death to the world, which passed through the entire human race. By His triumph over sin and death at Calvary, Jesus becomes our conduit back to God. A second Adam through which we obtain forgiveness and eternal life in Him by faith. You have a choice. Stay with your first Adamic nature of sin and face a Godless eternity or come to Jesus as your Lord and Savior. Take it seriously. Think carefully. Don’t fail the test.