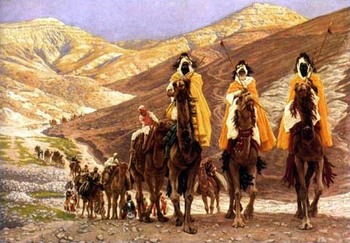 The tie in between today’s readings: Jesus Breaks Down the Walls

One of the most intriguing parts of the Christmas story is the visit of the Magi (Matt 2:1-12). You can understand an impoverished family arriving in a crowded town and having to use a stable as an emergency Labor and Delivery Unit because there was no other place to go. Shepherds and angels are a nice touch too, but the thought of kings coming from the east with gold, frankincense, and myrrh is just way out there. The Bible isn’t much help on the topic either. We don’t even know how many kings there actually were. They just arrive out of the blue at Herod’s palace asking for directions. From there, they are directed to a small village with a billboard that reads: “Welcome to Bethlehem, the birthplace of the Messiah!” Their guiding star like a MapQuest® marker points out the house where the Holy Family is staying. They knock and greet a stunned Mary and Joseph with a surprise that could only be compared to winning the Publisher’s Clearing House Sweepstakes®. They worship the toddler Jesus and present their gifts. Shortly thereafter, everyone bolts out of town just in time to escape the oncoming carnage of Herod’s wrath. So, what can we say about a bunch of rich guys schlepping across the desert on the first recorded star trek? Well, one observation that’s certain: something big was happening and they wanted to be a part of it.

Whether they realized it or not, they were fulfilling the prophesies found in today’s readings: Isaiah 60 and Psalm 72. The Magi are the first in a long procession of Gentiles that will come to worship the King of the Jews, soon to become the King of the world (Philippians 12:10, Romans 14:11). Up until this point, God’s promises to Abraham were confined to his descendants. God wanted Israel to be a shining beacon on the hill drawing all the nations to Jehovah.  It didn’t work out that way. Instead of reaching out to the world, they made an exclusive club out of their Abrahamic pedigree. They were the children of God. Everyone else was on the outside looking in. Now, the Messiah has arrived and the wall of separation between Jew and Gentile must come down. Jesus’ worldwide message and mission trumps all other earthly considerations. When everyone is a sinner in need of salvation the foot of the cross becomes level ground. All are in need. All who believe receive forgiveness. All must live for something bigger than themselves: the Kingdom of God.  Everyone is unified in Christ who is all in all.

In our last reading, in Ephesians 3, the Apostle Paul discloses the opened mystery hinted at throughout the Old Testament, namely that the Gentiles are fellow heirs with the Jews in the promises of God to Abraham.  By His cross and resurrection, Jesus established the “Jew at heart” scenario. All believers in Christ are true Jews and children of Abraham regardless of background and will inherit the earth to live with Jehovah forever in the New Jerusalem. I think the Magi in some sense saw this and considered it an honor to recognize His Majesty.  How about you? Have you come to saving faith in the sacrifice of Jesus?  Have you been born again into God’s family where there is no pride or prejudice of race, sex, or social class? If not, it’s time for you to go on a trek of your own to find the King of Kings and salvation in Christ. Wise men still seek Him.